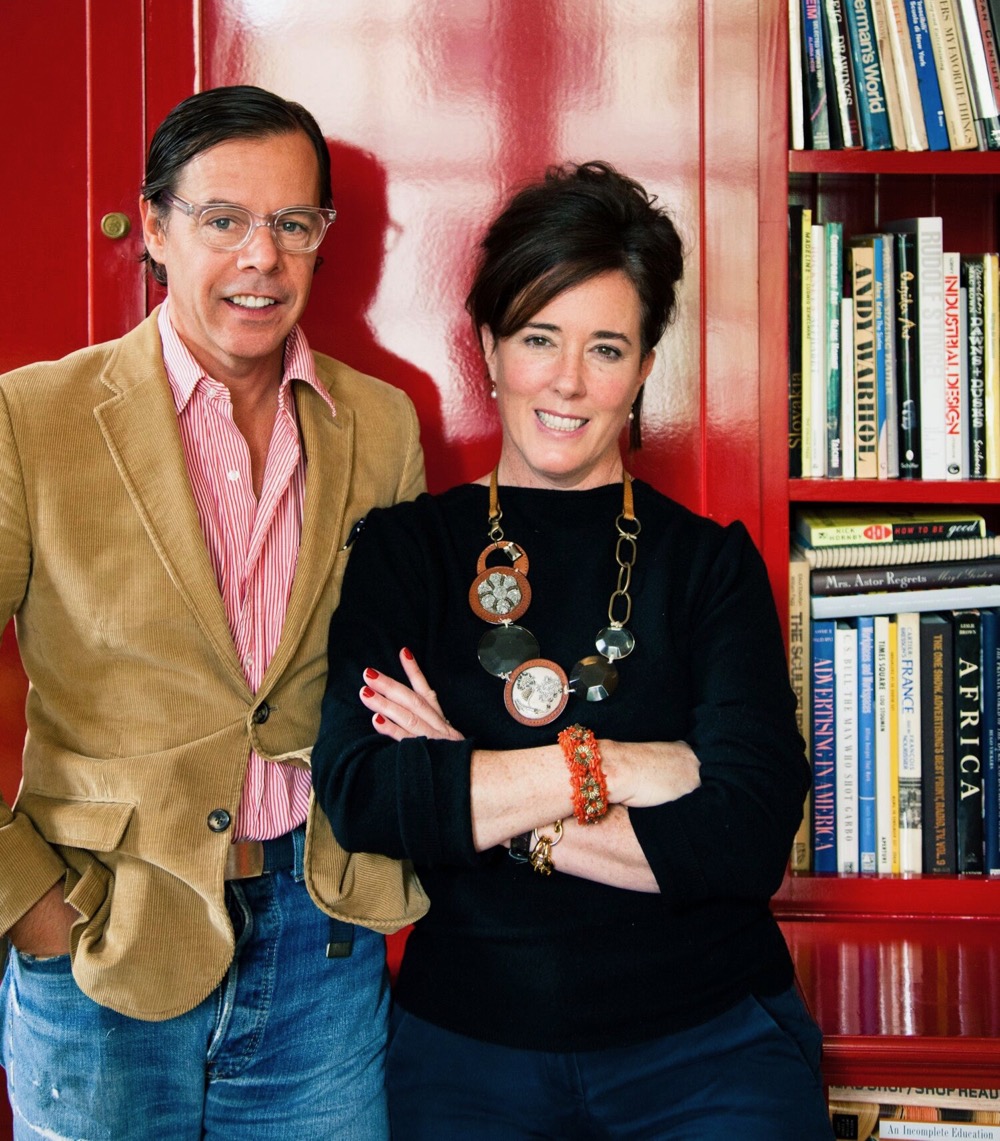 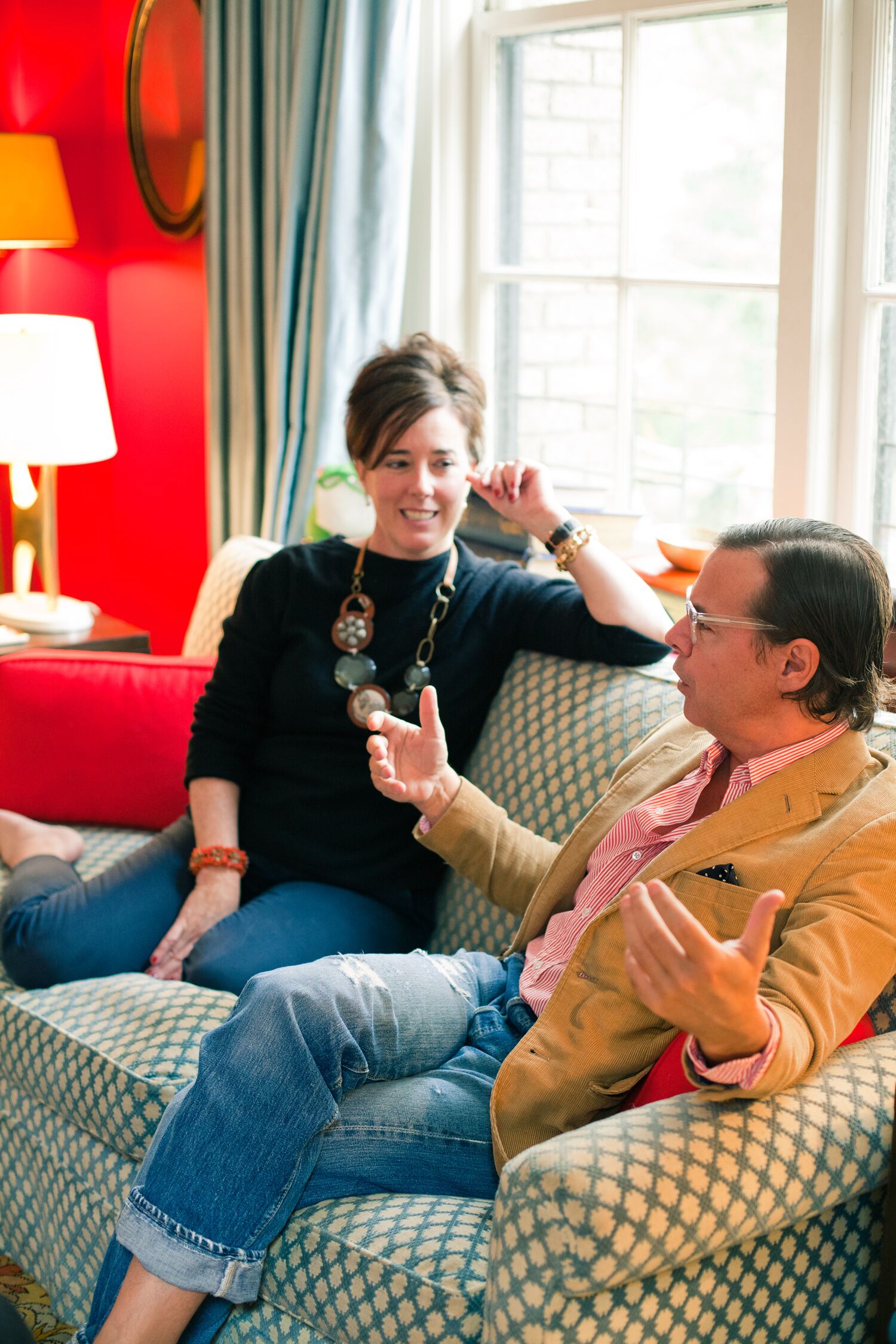 Here in its entirety is my refreshingly candid 2011 interview with Kate and Andy Spade. I’ve decided to share it after reading all your comments on this instagram tribute to Kate. Her style, humor, and trailblazing ways clearly inspired so many of us.

Katie: So let’s start at the beginning. You and Andy met back in college in Arizona. How do you think you’ve each changed since then?

Katie: Speaking of college days, I read somewhere that you worked in a motorcycle bar. There must be a story there?

Kate: A friend of mine was working at a golf course as a beverage girl and making a fortune. Well, I get there and I wasn’t very good, so they started me off working at the hot dog stand. I didn’t get promoted, so I was like, “I’m outta here.” The only place I could find that paid enough was this biker bar called Desperados. Andy would laugh because he would come in and I would be wearing a tennis sweater and these big pieces of fabric tied around my hair in a huge bow. They were like, “Are you serious?” 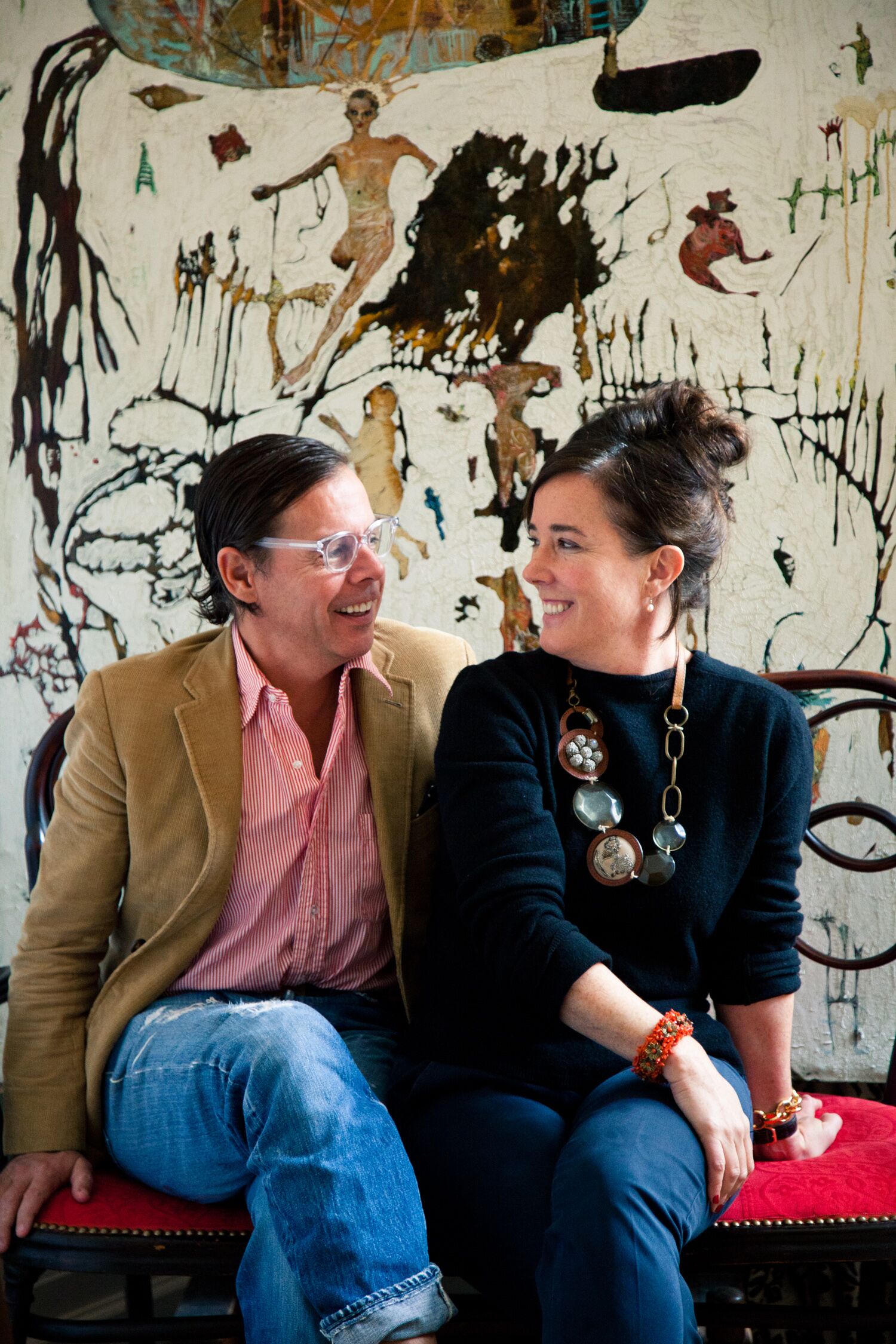 Katie: Amazing. Fast forward to New York and the early days of Kate Spade. What kept you motivated? Was there a moment you thought, “this is really going to be something”?

Kate: Andy kept me motivated. When we won the first CFDA I thought, “Okay, wow, people are actually taking notice.” I mean we were in stores, but only a few…

Katie: So Andy was the one that kept you going?

Kate: Oh yeah, he kept saying, “But Katy, these are the stores you want to be in!” And I would be like, “Okay, but we didn’t even make enough money to pay for the show we were just in.”

Katie: Did you have some concept of just how big it would someday be?

Kate: I would say Andy might have, but I definitely did not. We took on two partners…between the four of us we really were scrappy and very conservative in terms of how we spent our money. Even once we started getting some of the larger accounts, we weren’t tooling around town in a town car. It just wasn’t our thing. 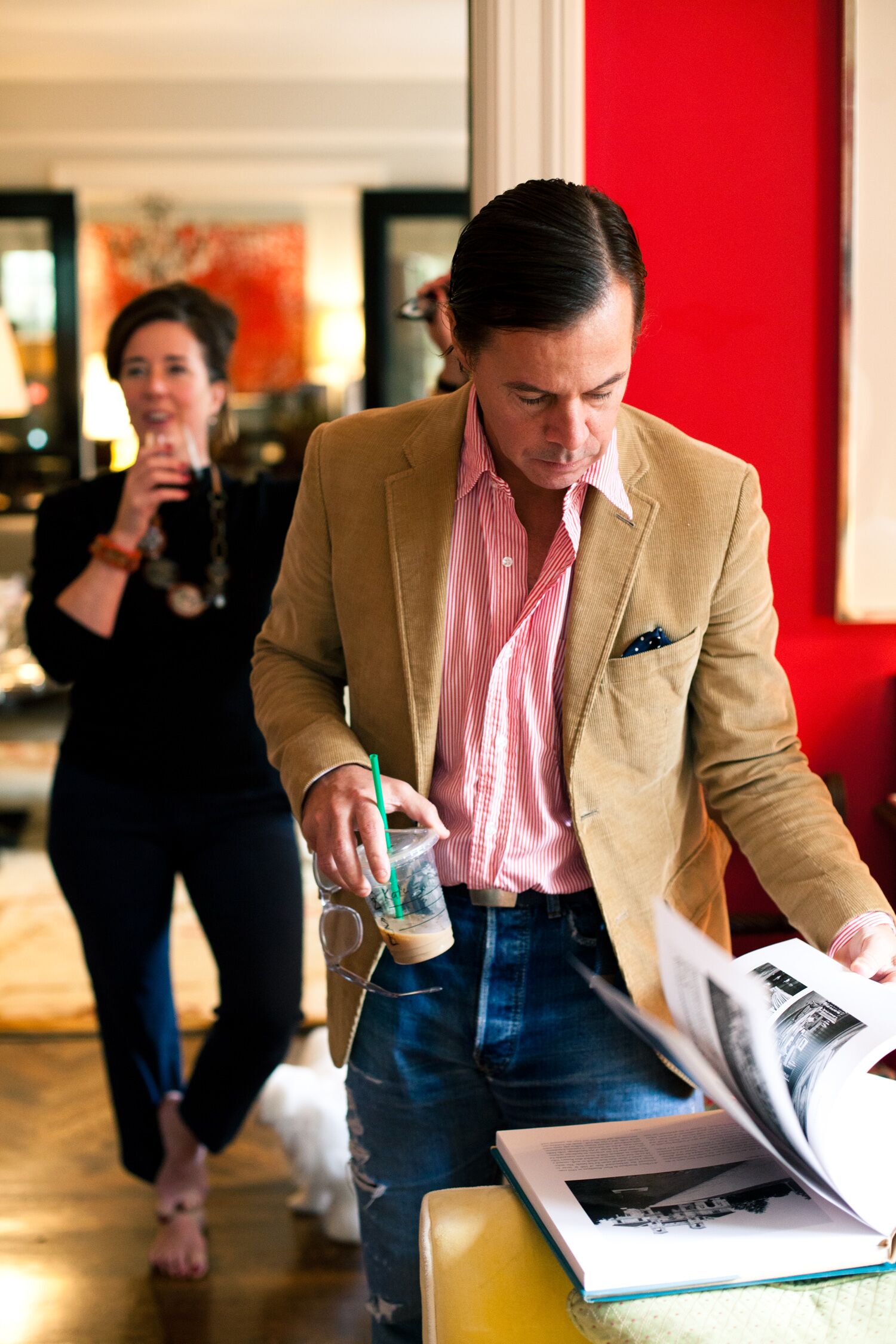 Katie: What year did you open the first store?

Kate: In 1995. It’s gone now. Once we moved on to Mercer, that was our flagship…we turned the old space into a travel store, a bookstore…but then we were buying all these vintage books and the girl was opening them up and selling them for what we paid for them, so that wasn’t really working out. There’s this little thing called “profit.” [laughs] What else? [looks to Andy who just walked in]

Andy: We turned it into a Christmas tree store…Our CFO eventually suggested we let go of the space.

Katie: So what was it like at Kate Spade towards the end? First you sold a percentage to Neiman Marcus and then eventually you sold them everything. They’ve since sold the company to Liz Claiborne. How did you know the timing was right?

Kate: It was a great partnership. It really was. We ended up selling the rest of the percentage because Neimans was selling themselves…We agreed to stay on for six months with whomever they sold it to. We didn’t want to up and run, but after that it was just a good time. Andy had really already begun doing all his other things and Bea was born and I was like, “This feels like it’s meant to be.” 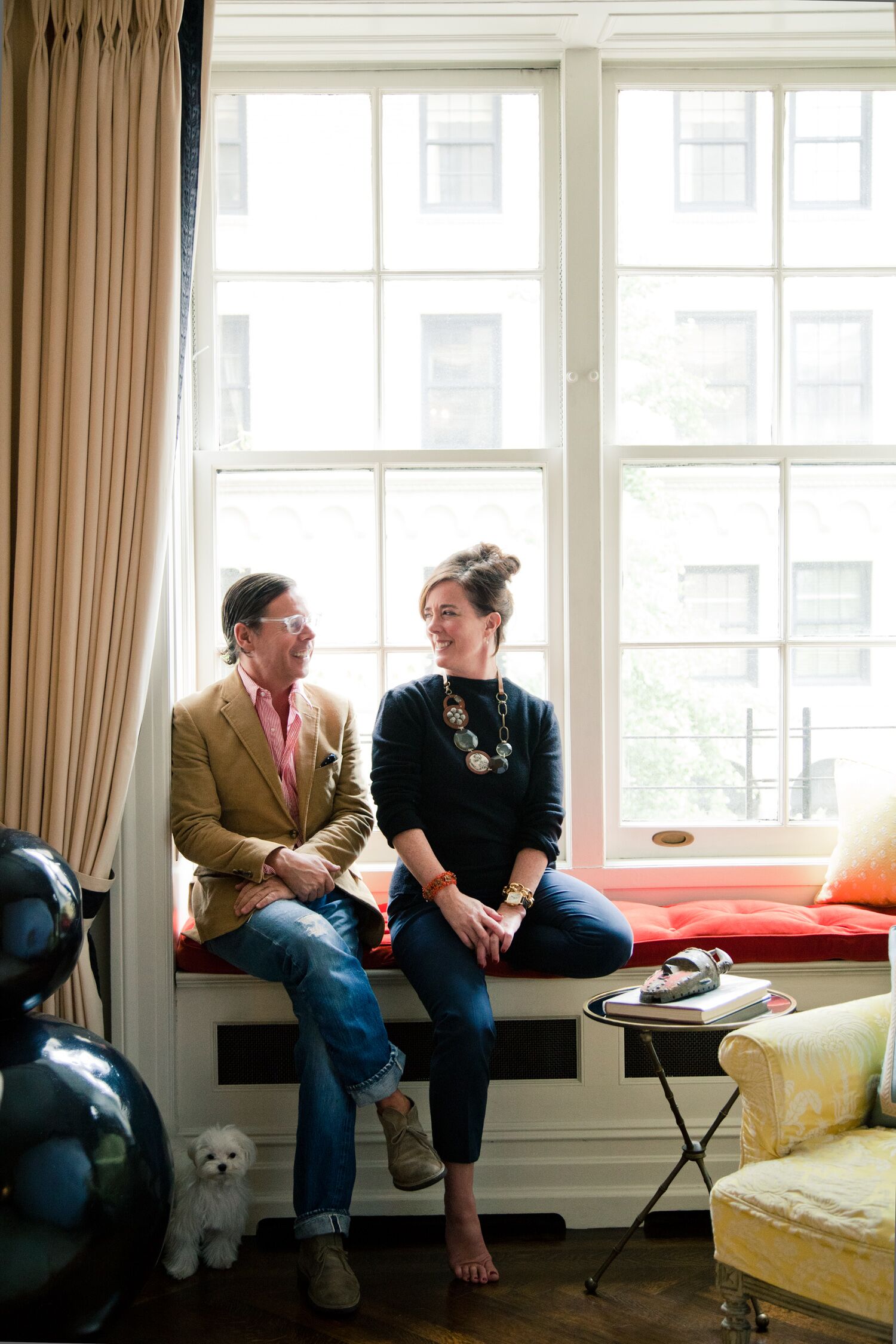 Katie: Many people still think it’s your company. Is that strange at times?

Kate: It oddly doesn’t phase me in the slightest. Except when people say, “Oh my god, I just bought the most darling Kate Spade,” and I don’t want to go into some big story. So I always just say, “I’ll pass that along.” [smiles]

Andy: People say, “How could you sell your name?” and I’m like, “What else can you do?” You can wait until you’re sixty like Calvin Klein or you have a family dynasty and you want to carry it on forever. The only thing to do is to try to find a place for it to go…There were so many other things in the world I wanted to explore.

Kate: Andy always said, “People always tell you how to start a business, but nobody tells you how to get out of one.” But I feel like we did it the right way. 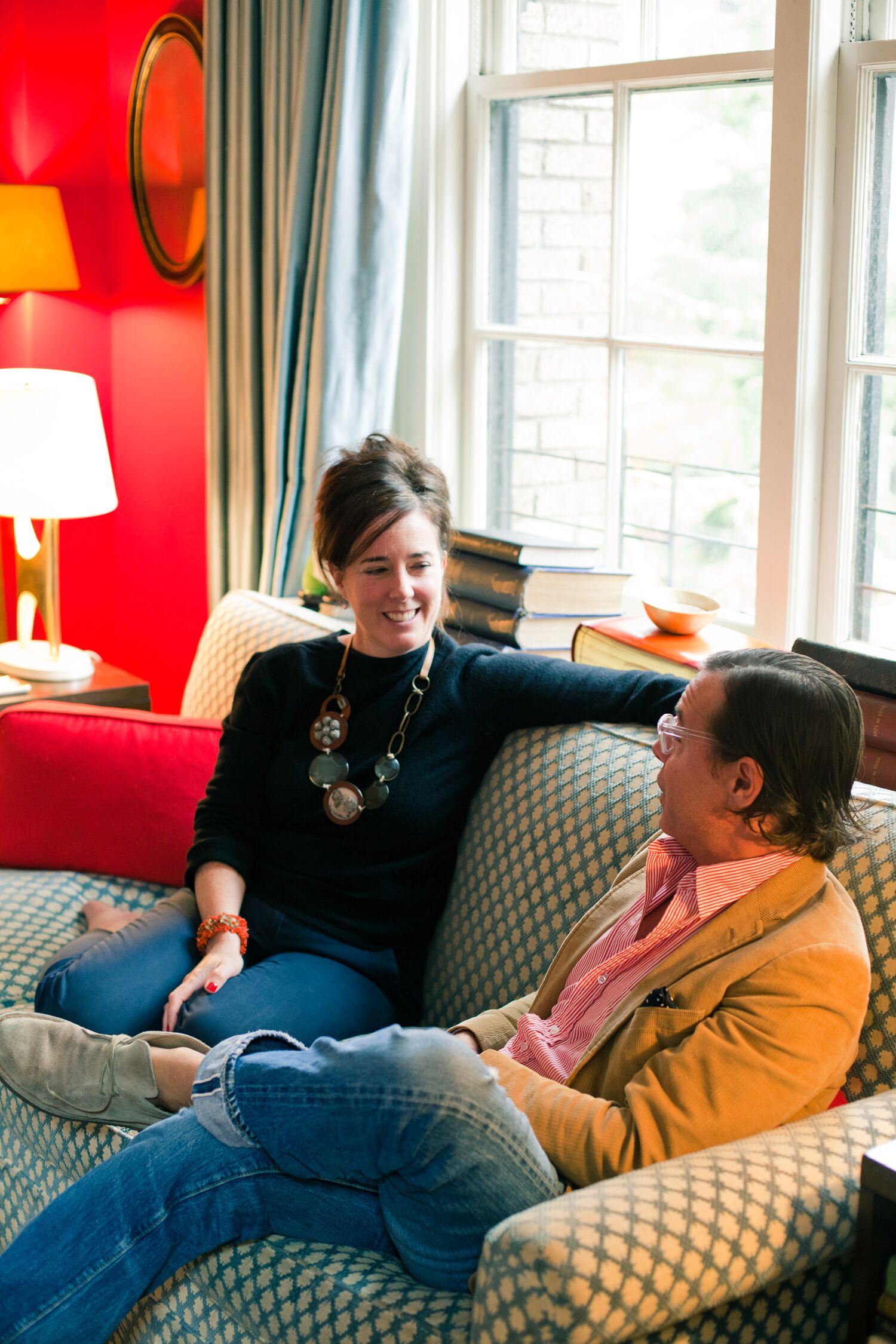 Katie: To me Kate Spade has always been a more approachable brand without the elitism often associated with the fashion industry. Was that a conscious decision? A reflection of your personalities, perhaps?

Kate: We had a lot of people that stayed for a long time.

Katie: I read that you gave every employee a copy of Emily Post’s Etiquette.

Kate: Yeah. They were like, “Umm, we were really looking for a check…”

Andy: Right, “Merry Christmas! Remember to put your napkin on your lap!” No, we gave it to them when they started working for us.

Kate: It was not as a bonus.

Andy: Don’t ever give it out as a bonus. [chuckles] 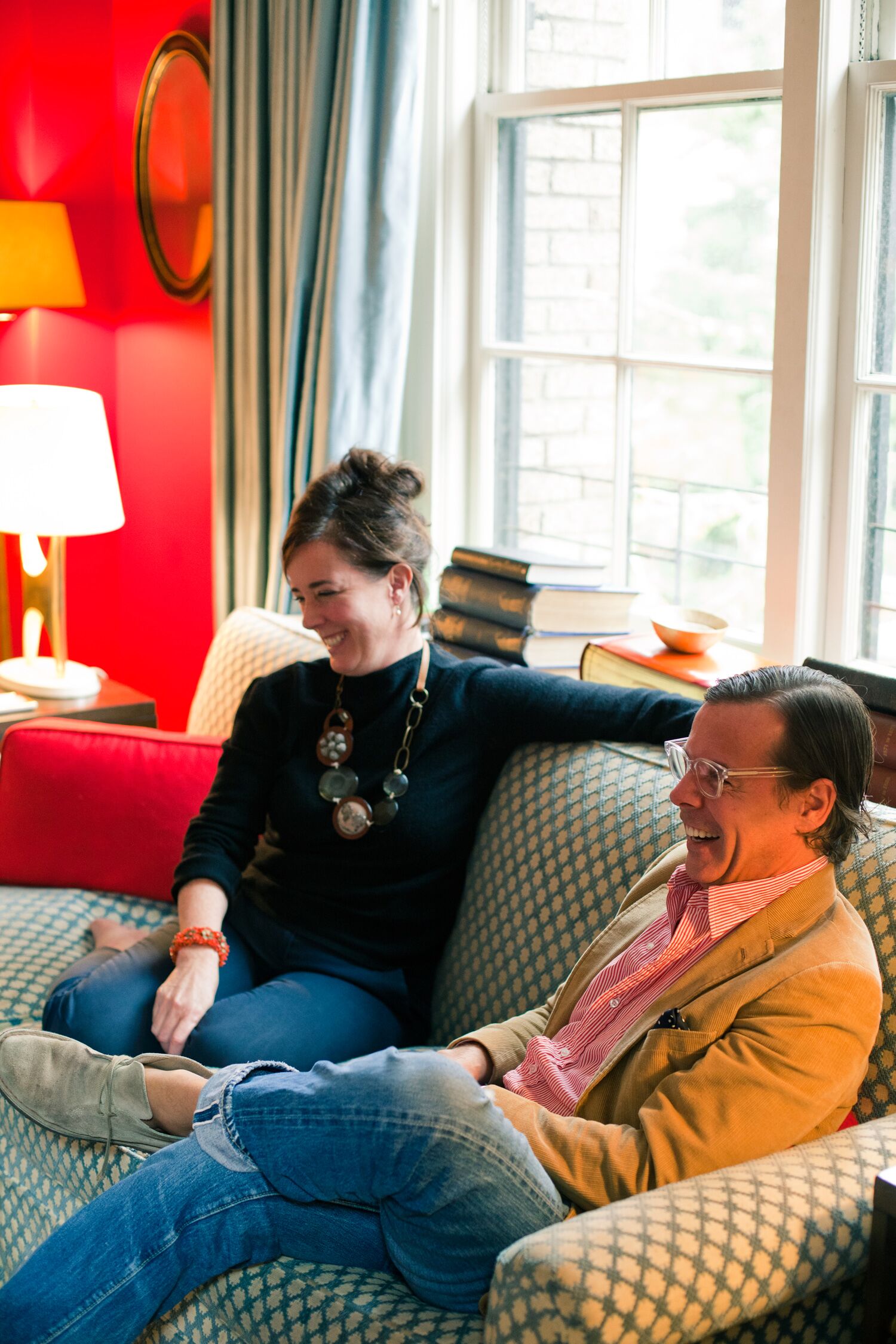 Katie: Okay, let’s talk about those amazing early ad campaigns. I’ve literally bought them off eBay to frame in my house.

Kate: They were the best. Andy and Julia [Leach] did those.

Andy: You can really get them off eBay?

Katie: Yeah! I bought the one with the handbags hanging out the windows of the house.

Katie: Yeah, I mean, you worked with Tim Walker.

Andy: I always thought that fashion advertising looked very phony and over-styled and not real. I couldn’t relate to it. I appreciated family pictures and things that showed how people really lived. I would collaborate with the photographers like Tim [Walker] and Tierney [Gearon] and we would just run around–we didn’t even have a plan. We’d have a general idea–a location, a family–and then we’d just come up with things. We’d have them play hide and seek and then shoot it. Almost like little slices of a film.

Andy: Yeah, like theater. And then maybe people see a moment that they were in at some point in their lives.

Katie: I think their being so relatable is why I loved them so much. Okay, let’s shift gears a bit. How has having Bea changed things? What’s it like being parents?

Kate: It’s just the best thing, except when we have to get up early in the morning for school. [laughs] …She’s super sweet, which is so nice. She’s a good girl.

Andy: I think we’re both finally getting a formal education through our daughter because she’s coming home with so much homework.

Kate: She’d talk about the solar system when she was in preschool and I was like, “what?”

Andy: She really just inspires us. I’m not kidding, she’s just the most fun. We have the Avant Garde Preschool at my shop now with people like Thurston Moore of Sonic Youth speaking to the kids. She’s always inspiring new projects.

Kate: Someone once mistook that drawing behind you as Bea’s work. Andy was like, “Um, that’s Jean-Michel Basquiat.” [everyone cracks up]

Katie: So do you travel as a family often?

Kate: Well one of us is going to Bali! [referencing an upcoming trip Andy is taking to shoot a Quicksilver campaign] We’re going to London soon to visit friends (Bea says she wants to meet Princess Kate and see her dress). And we’re going to Mexico over Christmas with Andy’s family.

Andy: Every spring we go to Jackson Hole to ski and then we spend the summers in California.

Katie: Understandable. So the apartment…it’s been published multiple times and I always get a kick out of how it’s changed. Will it ever be finished? Or is it ever evolving?

Andy: It will always be evolving. When Bea gets older we’ll probably have to change the dining room into a ping pong table or whatever they call them.

Kate: It will change for sure. Or we’ll move. I wouldn’t want to change the footprint of the place.

Katie: Are you in New York for good or would you ever consider moving somewhere new, say out West?

Andy: I think we will. Absolutely.

Kate: Yeah. I mean, that’s the first time I’ve said it. For so long it was the last thing I was thinking of, but now Bea sometimes doesn’t get home until 6:30 p.m.

Andy: We have an idea…We registered a name.

Katie: Registered a name? This is breaking news! We don’t have to publish it…

Kate: But now everyone’s going to be like, so when? Time for me to get out of lazy mode! 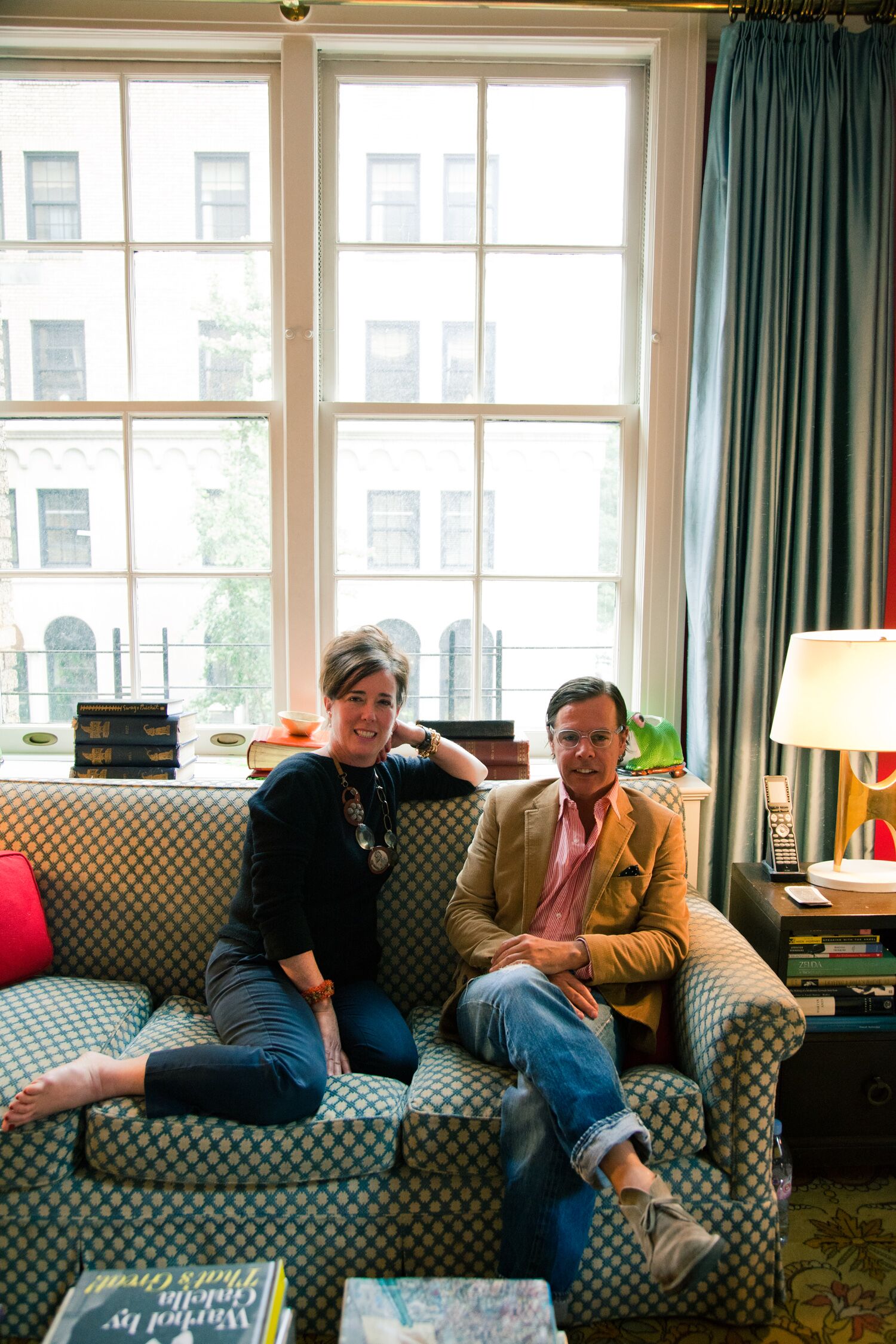 Katie: No pressure, just gives us something to look forward to! Okay, now for some fun quick questions. What is your cocktail of choice?

Andy: I think a Southside.

Katie: Both of you?

Andy: I don’t want to have the same one as you. I’ll change mine.

Katie: How many years have you been married now?

Kate: Well, we moved in together in 1987, so how many years is that? Twenty-four? And we lived together for nine years before we got married.

Andy: What’s twenty-four minus nine? Anyone got a computer?

Katie: And you used his name before you got married, which I love.

Katie: What do you admire most in each other?

Andy: You never tell me that. I would say your kindness too.

Andy: Okay, I like her sense of humor. Does that work for your story? [laughs] 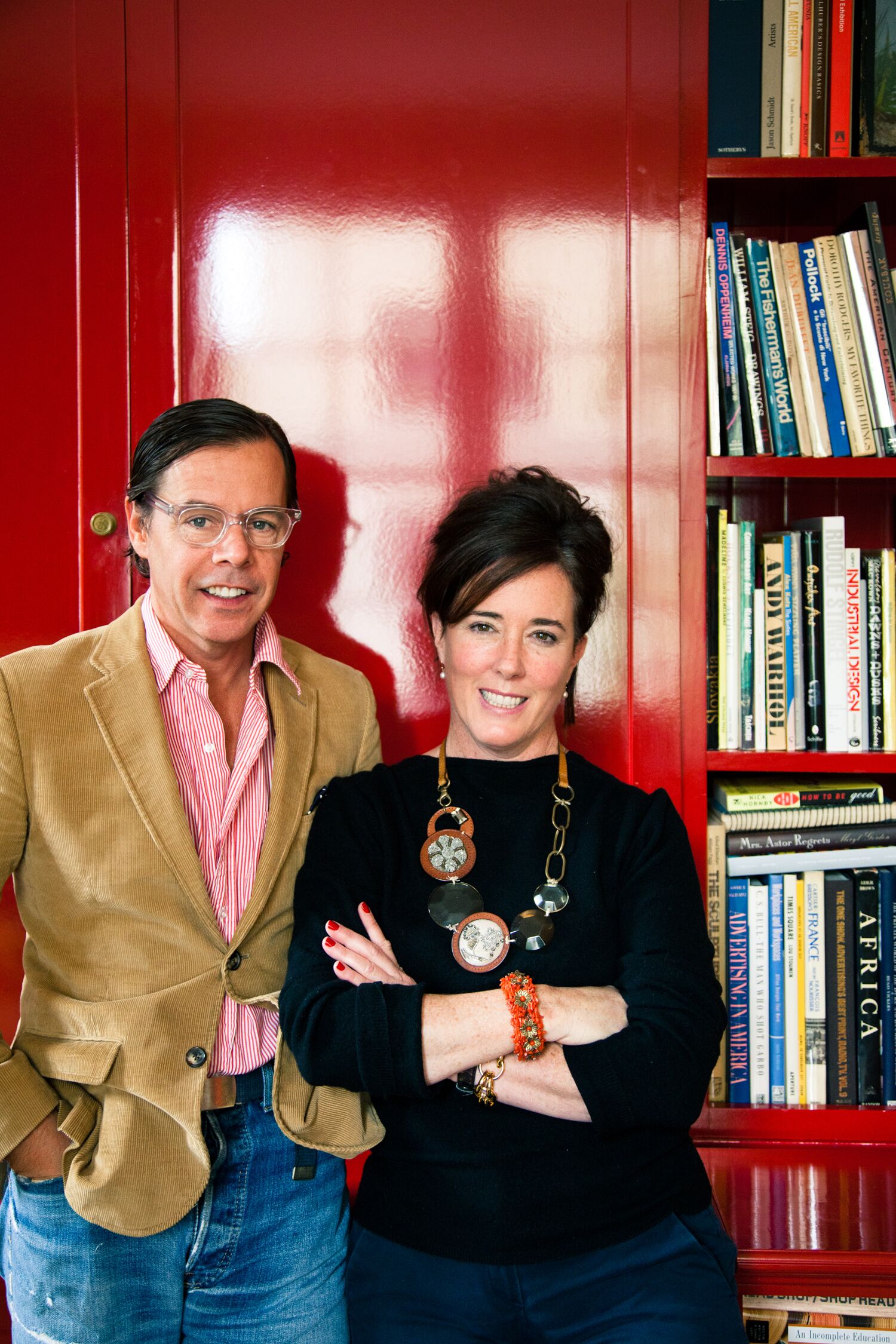 Katie: Who are some of your personal style icons?

Kate: I mean this is no news to anybody, but I think Kate Moss hands down. She just gets it–so effortlessly. And I think Lauren Hutton still today. Oh, and Michelle Williams–pretty cute. Very cute.

Andy: I would say this guy named Walter Hopps who ran the Ferus Gallery in L.A. during the Sixties when they first showed all the New York abstract artists. All those guys–Rauschenberg, de Kooning–the way they dressed in old men’s shirts with rolled up sleeves, jeans or khakis. All the artists and writers of that generation–Hopps always looked great. They weren’t styled, they were just dressing like real people.

Kate: Raoul’s. Like forever. They remember us from when we would sit at the bar and split the bar steak and have a glass of wine. Oh and The Ear Inn. It’s great…Oh, and Bar Hemingway at the Ritz, but that’s in Paris. I have an ashtray from there which I did not steal, by the way. I bought it.

Andy: Great Jones Cafe I love. And we love Indochine.

Katie: Last but not least, what is your idea of a charmed life?

Kate: I’d say summer off with my daughter. I’m like a kid waiting for summer.