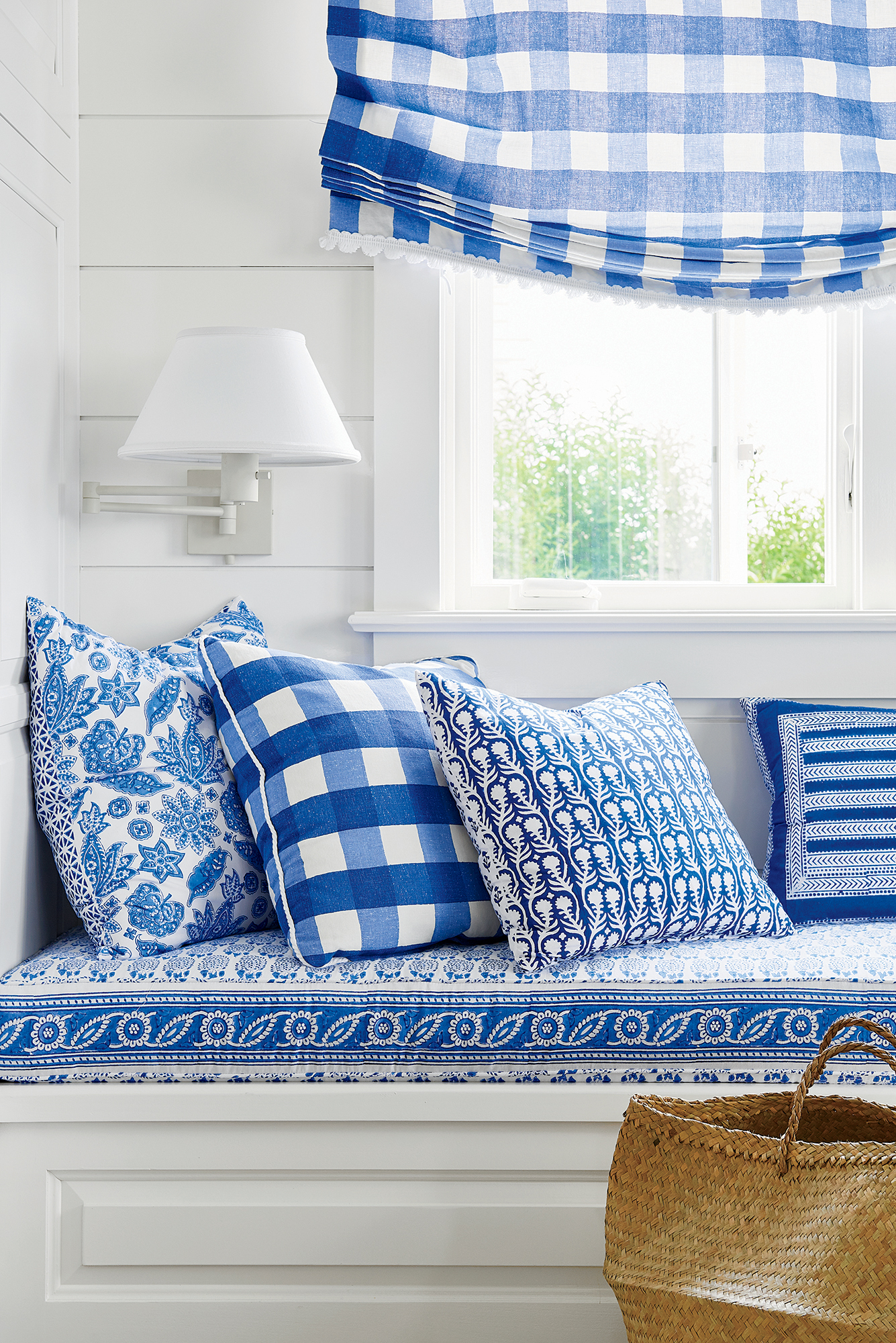 This afternoon, I thought we’d discuss how to decorate with gingham without going crazy country kitsch. You’ve probably seen the classic plaid all over lately—on dresses, on bedding, even on plates. Turns out the pattern you might have once dismissed as granny is now considered to be quite chic! Below, I’ve rounded up several examples proving gingham can look tasteful in any interior. First example? The window seat above by Mark D. Sikes. Is there anything more timeless than blue and white? (Photo: Amy Neunsinger) 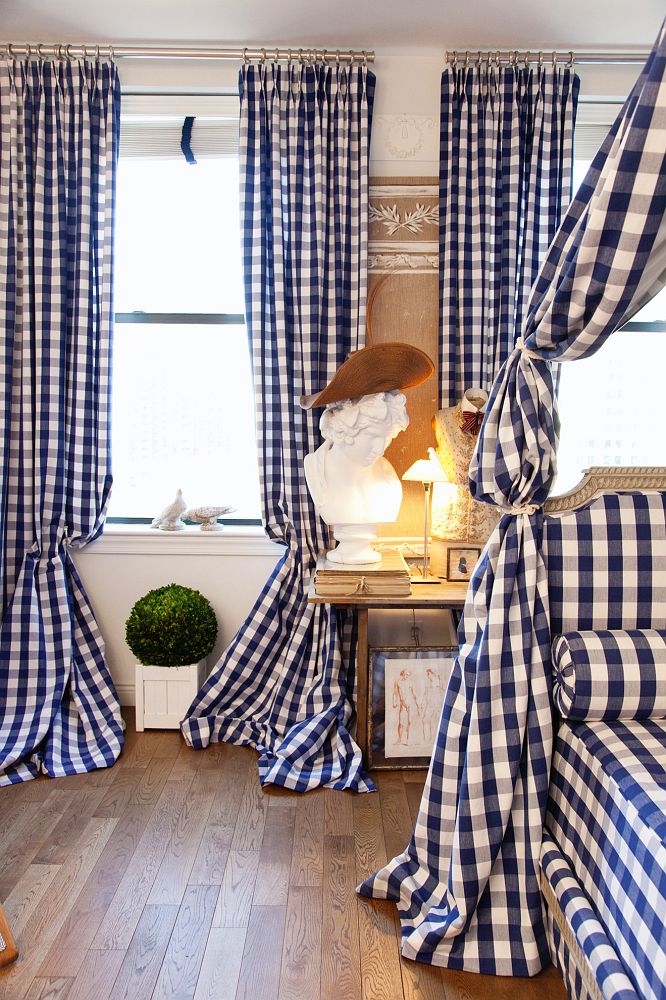 I’ll never get over the dashing New York apartment of fashion designer Hervé Pierre. In these shots from The Selby you can see his opulent gingham curtains and matching bed canopy. 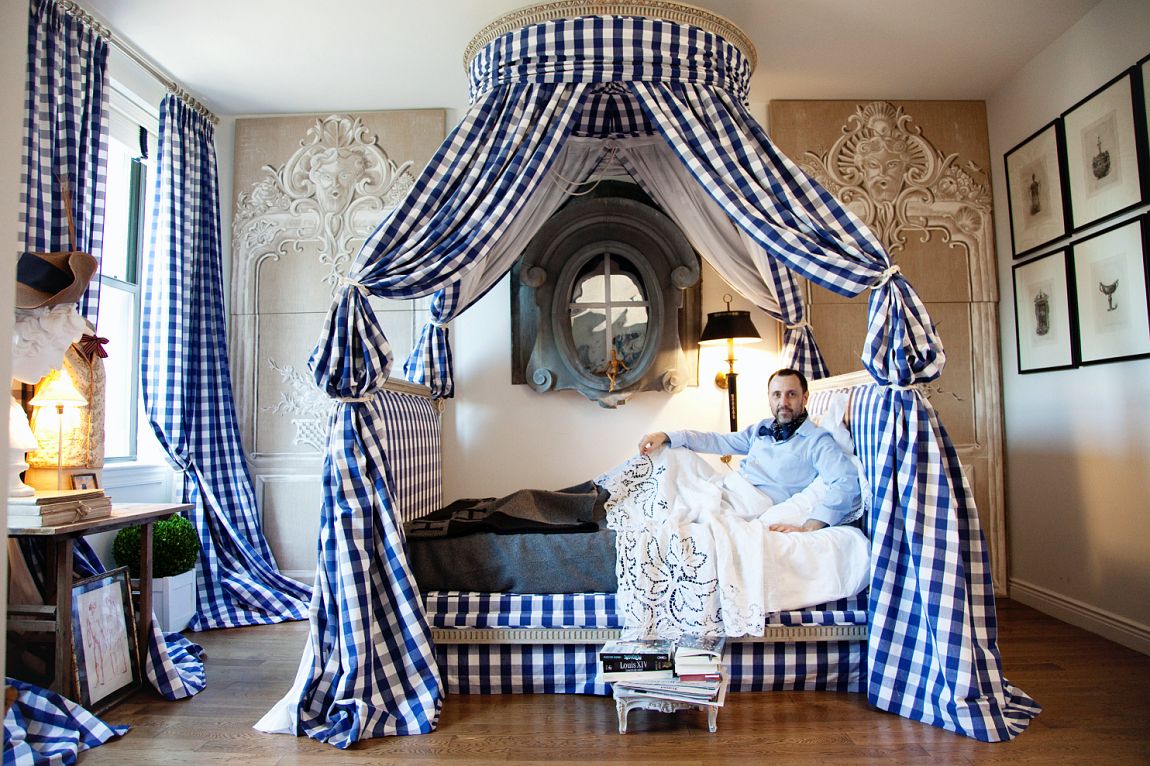 I mean, it really doesn’t get any better than that antique Louis XVI bed. A little slice of Provence in the heart of Manhattan! 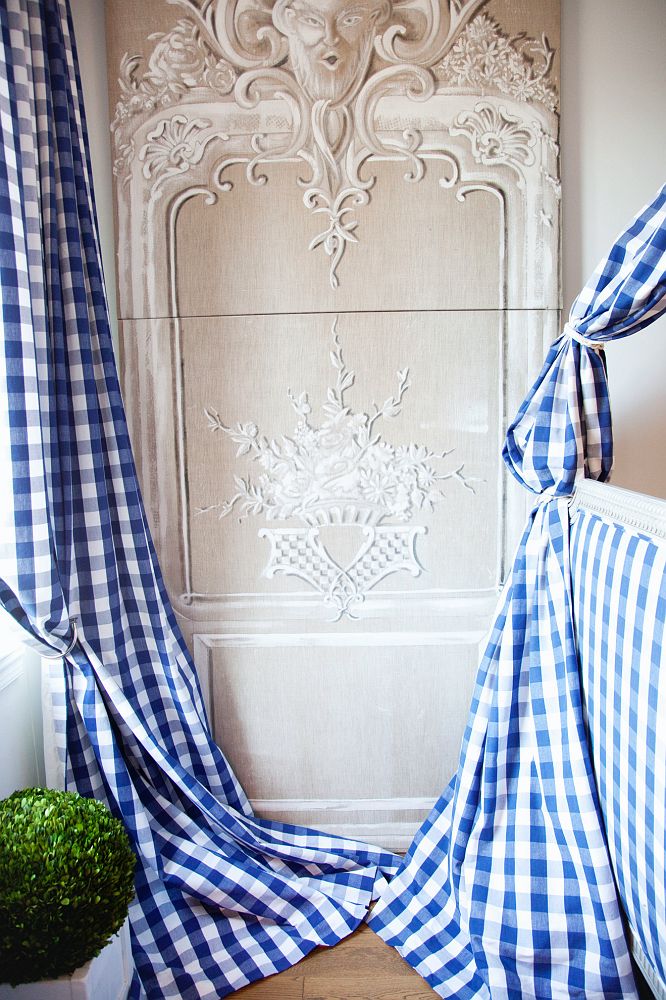 One more, I can’t resist. Did I mention Hervé painted those panels himself? And someone get me some boxwood planters, stat. 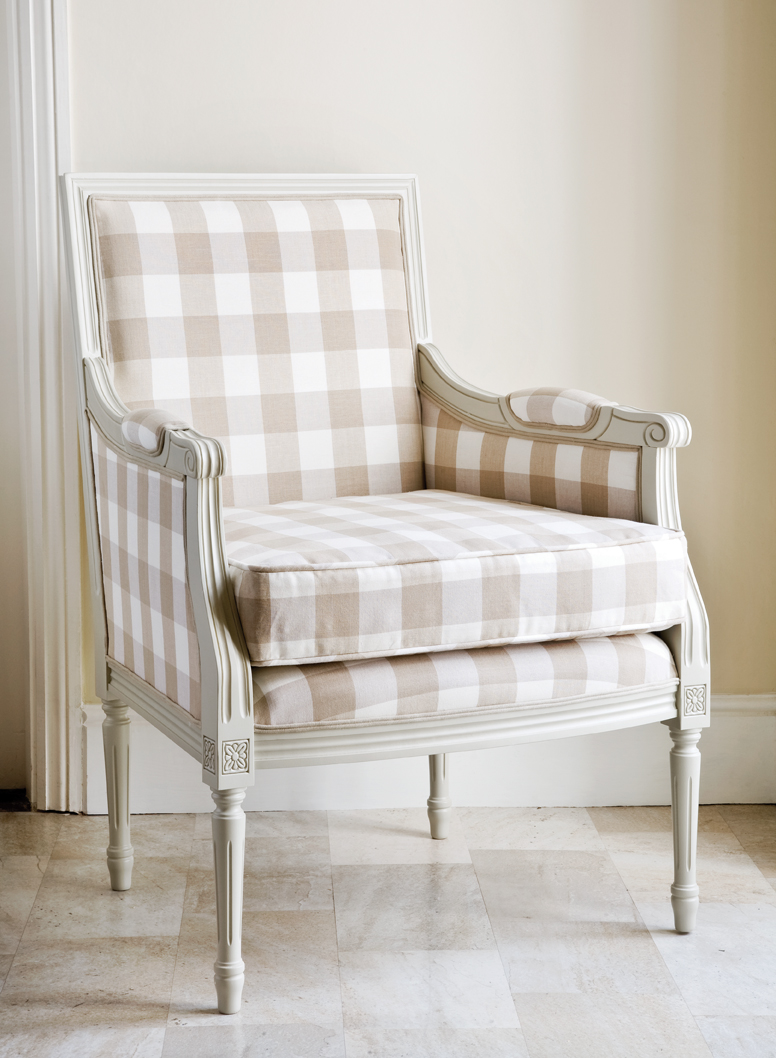 I stumbled upon this Louis XVI style armchair on Pinterest. Doesn’t it look smart upholstered in gingham? 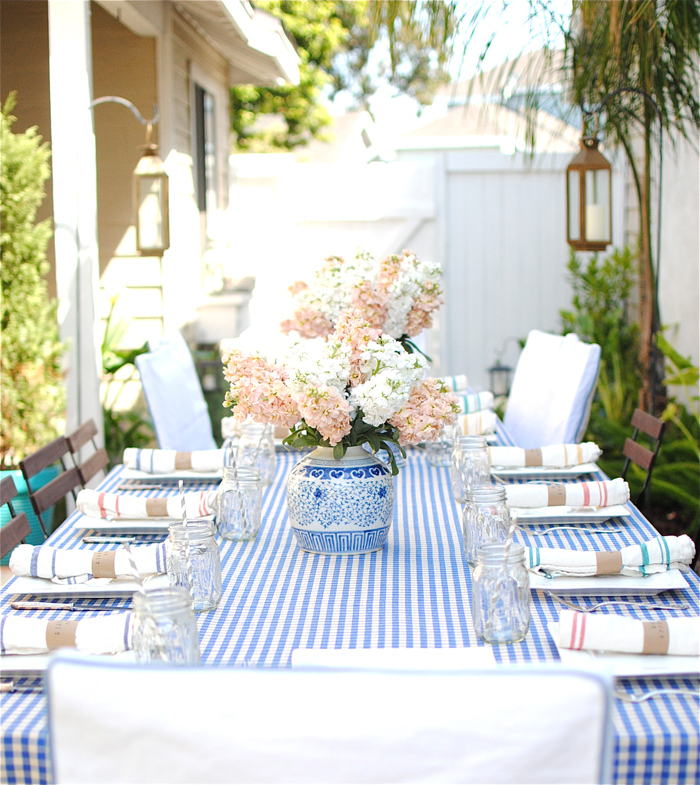 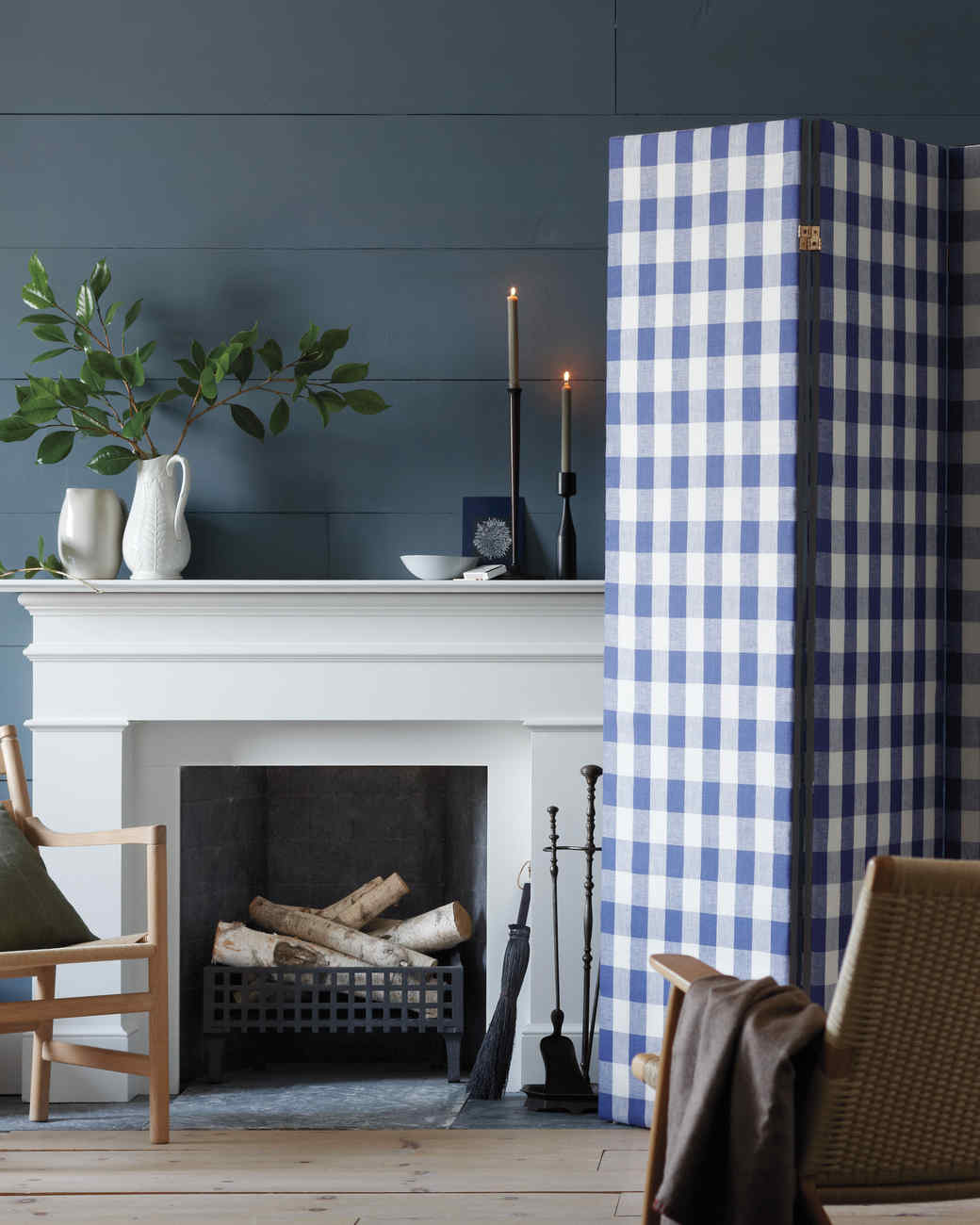 Gingham works in colder seasons, too. This larger scale gingham (also known as buffalo plaid) has a moment every autumn. I had a gingham folding screen in one of my early apartments to disguise an ugly radiator—worked like a charm! I DIY-ed it and it showed, but I was quite proud of myself. (Photo: Dana Gallagher) 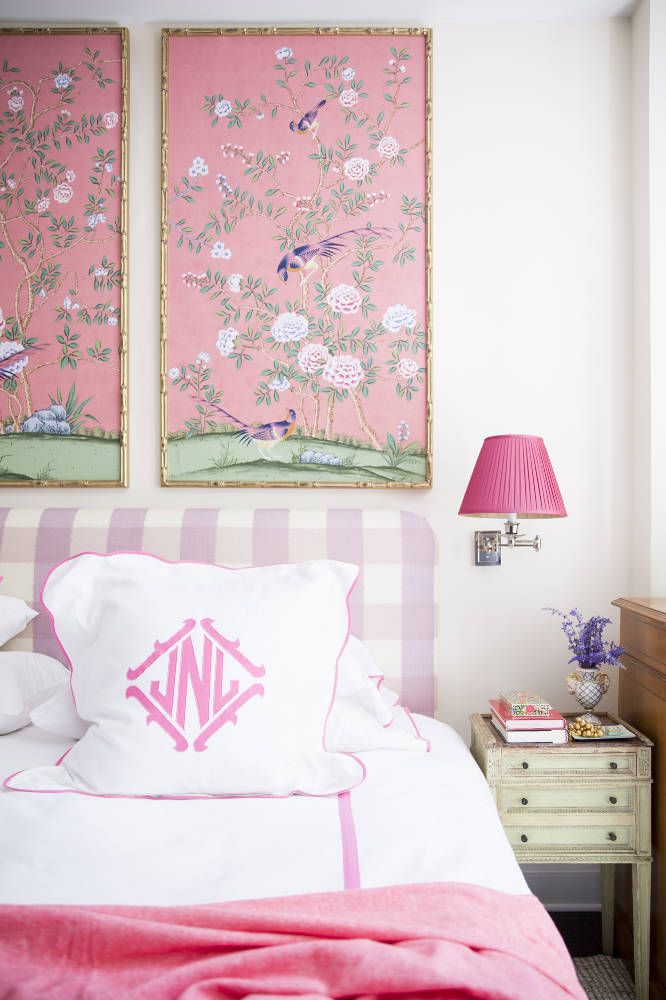 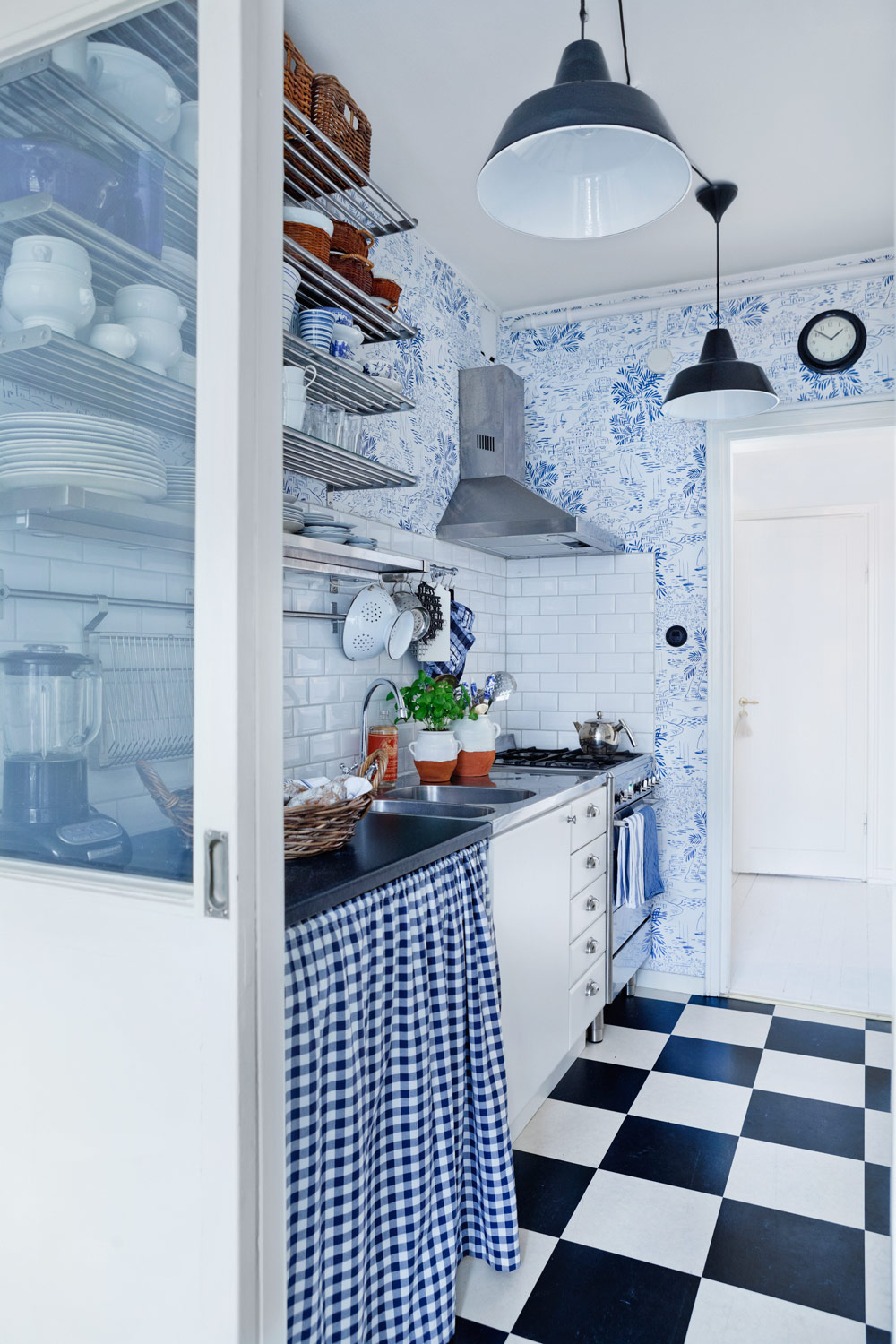 A charming blue and white kitchen in Sweden. How sweet is that gingham skirt? I’m also crazy about the scenic wallpaper, classic white subway tiles, and checkerboard floors. 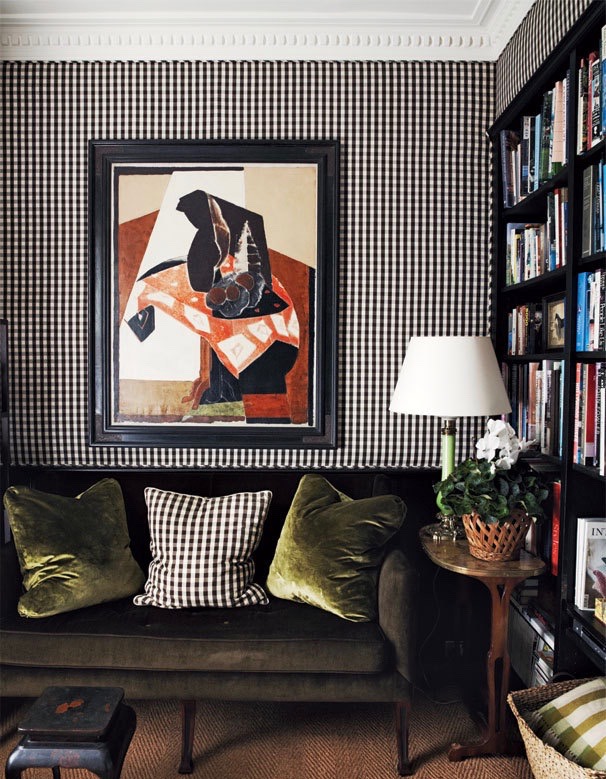 A more masculine take on gingham can be found in this home by Australian designer Cameron Kimber. I love the dark, moody library and its plaid upholstered walls. 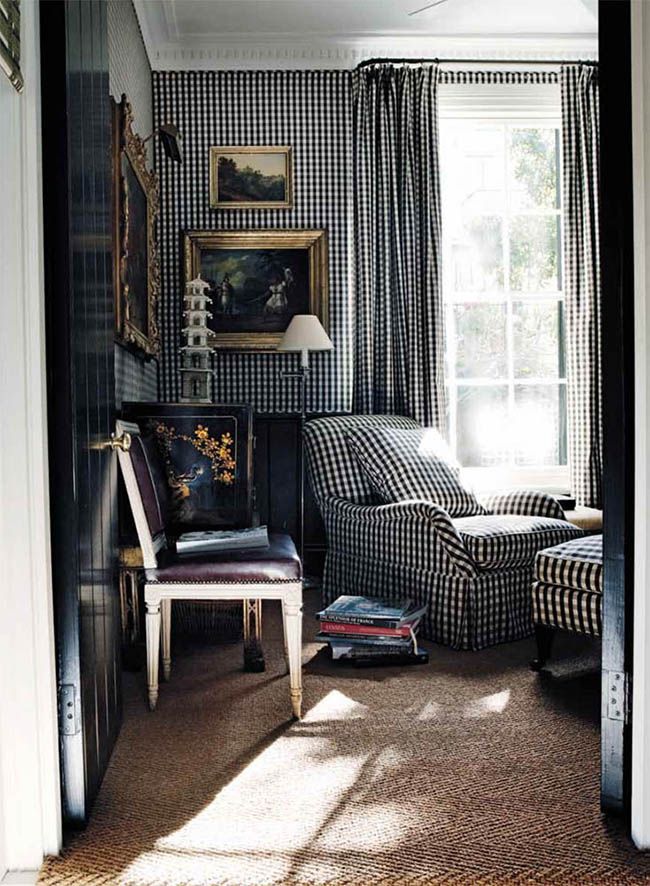 Another glimpse of the gorgeous space. Love that he used the gingham on the chair, ottoman, pillows, curtains, and walls. Very “more is more and less is a bore.” 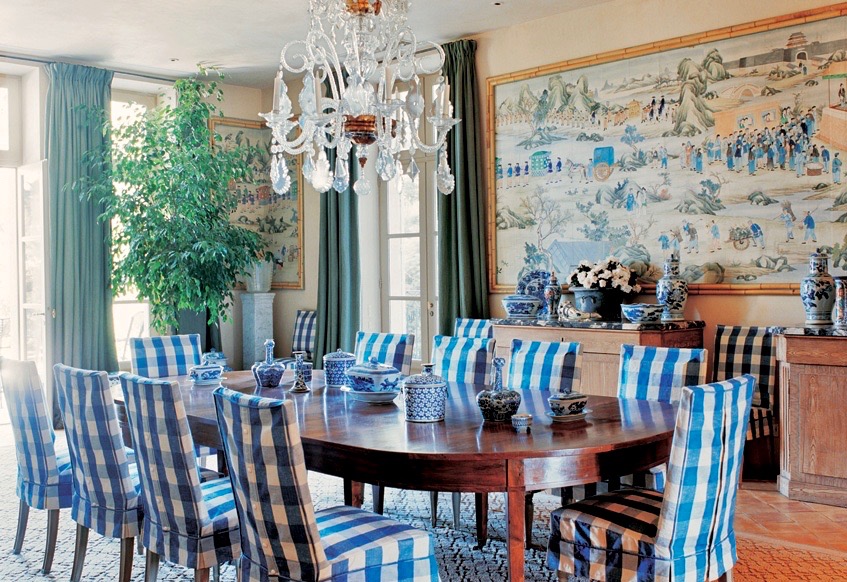 Blue and white gingham slipcovered chairs in a dining room by the legendary Bunny Williams. 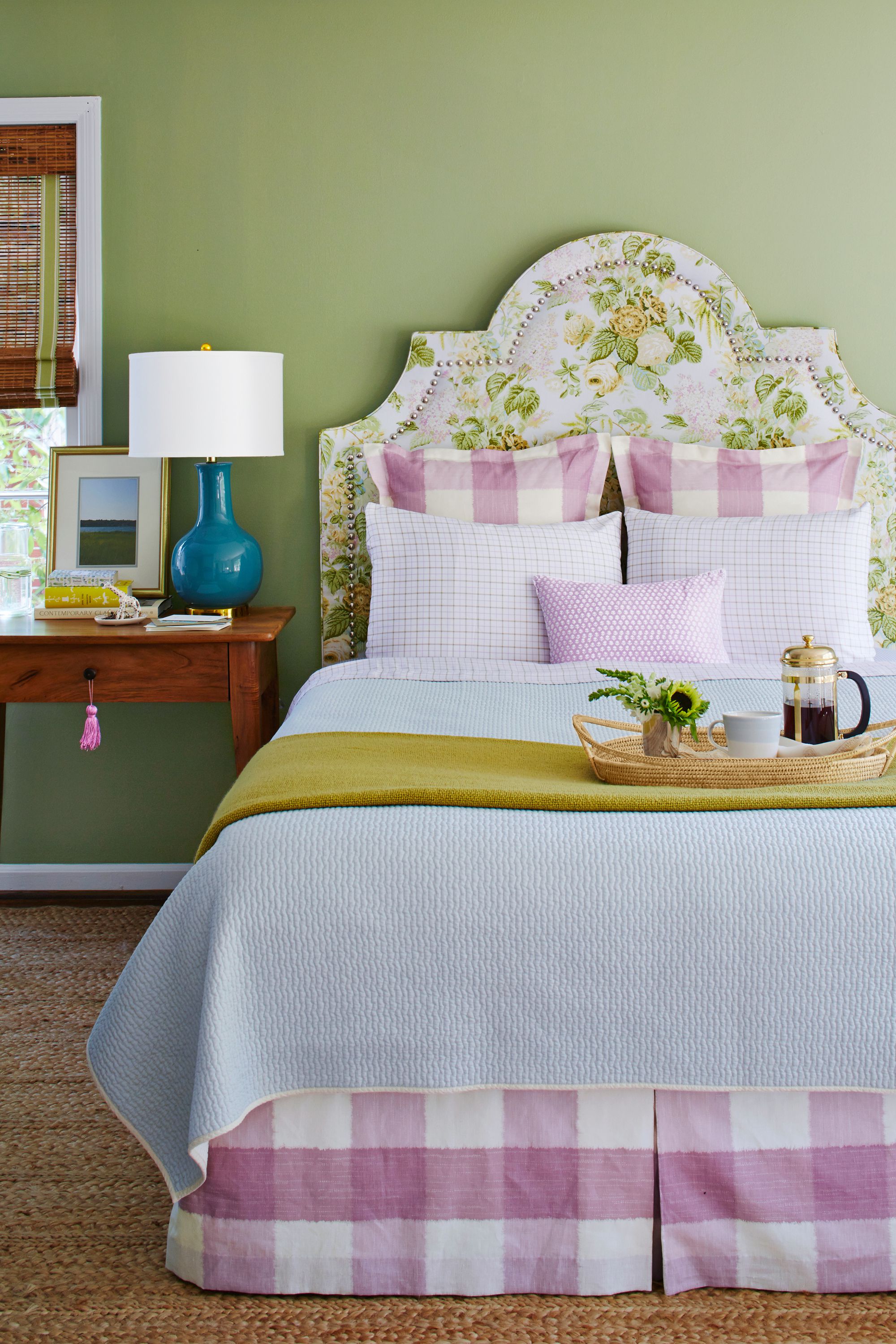 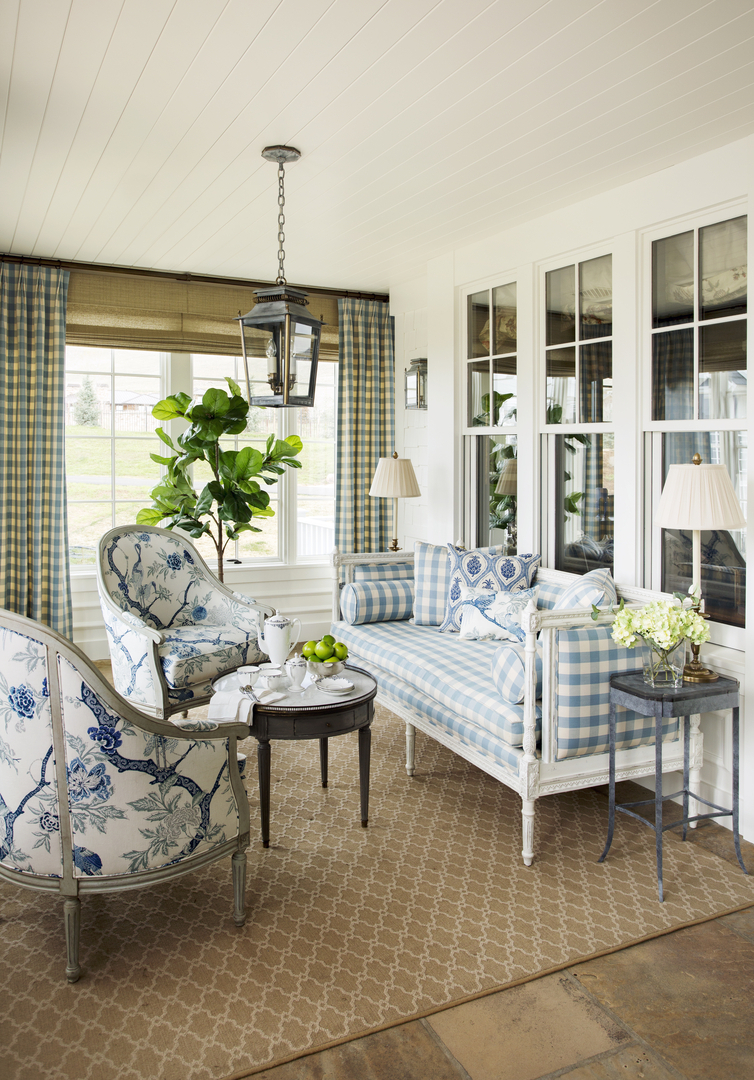 In this pretty sun room designed by Alexandra Rae two different ginghams were used—one on the curtains and another on the settee. 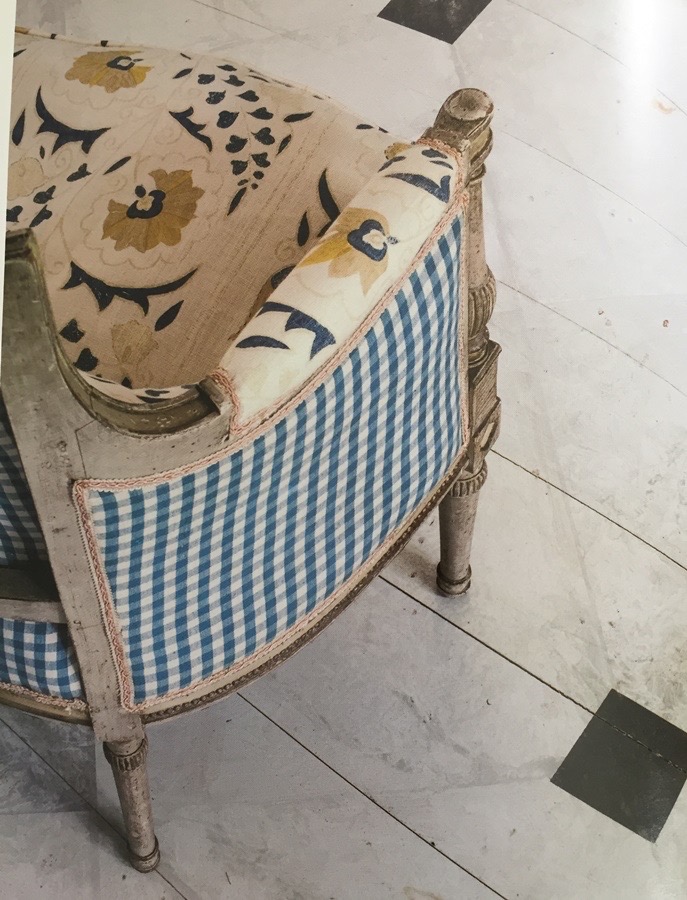 Even the masterful Furlow Gatewood loves gingham. His antique chair was upholstered in a Robert Kime fabric and a blue plaid. I love when one chair has two patterns. As they say, design is in the details. 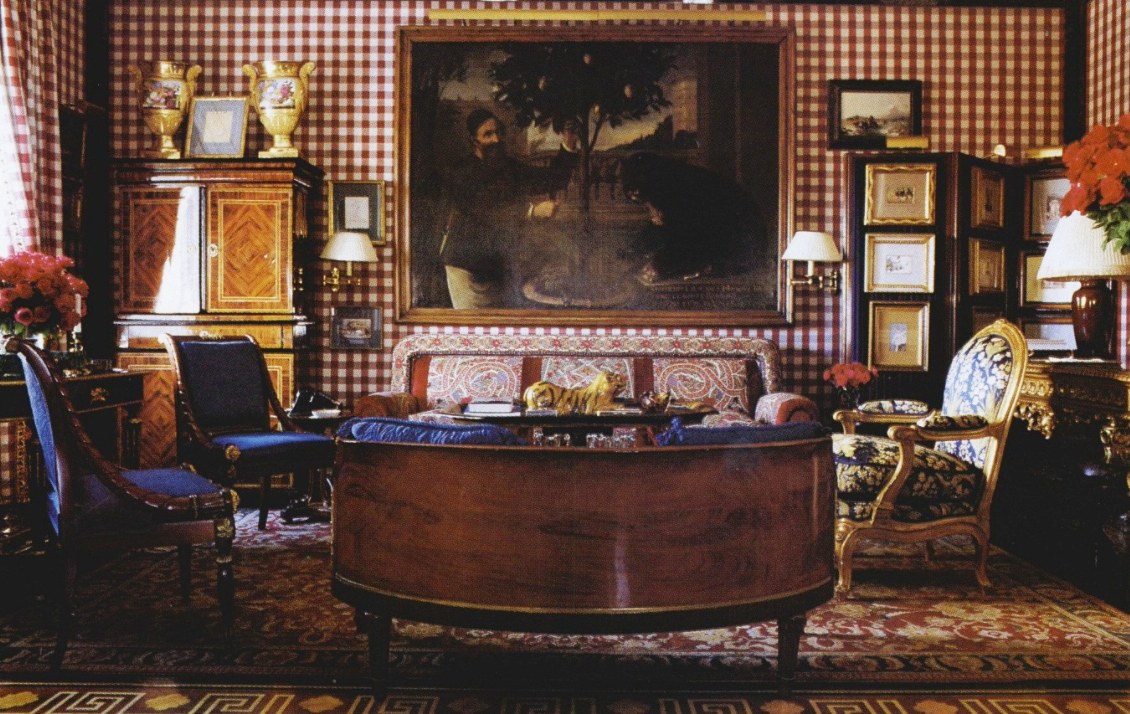 I know the quality of this image leaves much to be desired, but I had to show you that even Valentino once went plaid! Back in 1989, the fashion designer’s New York apartment had Le Manach red gingham walls and a dreamy sofa upholstered in an antique Turkish wedding cape. I’m obsessed. (Photo: Michael Mundy) 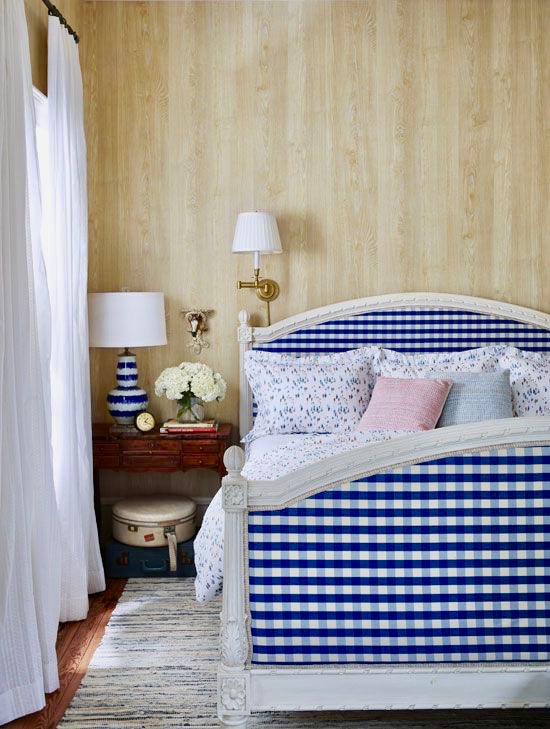 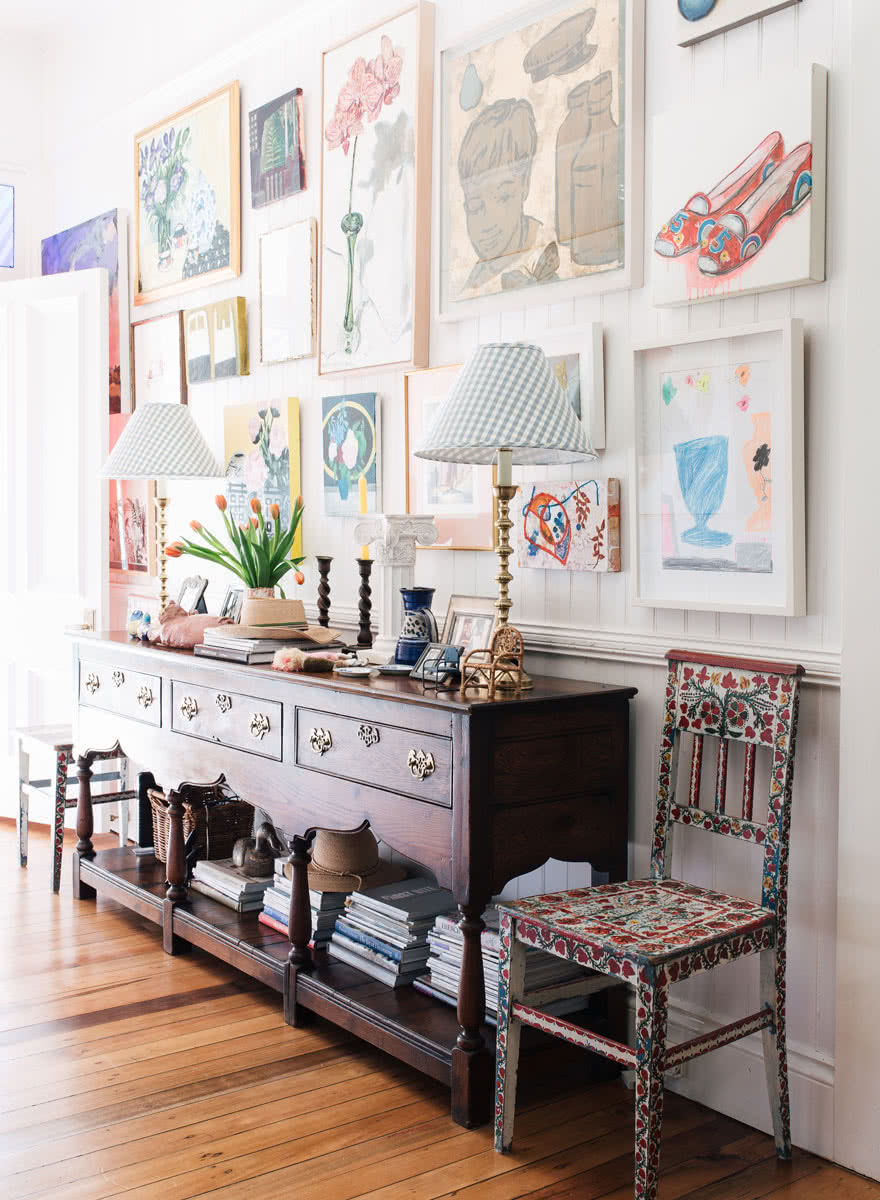 A subtle touch of gingham on the lampshades of Australian designer Anna Spiro’s home. Anna also used to have dining chairs upholstered in a classic blue gingham, but she’s since switched things up. 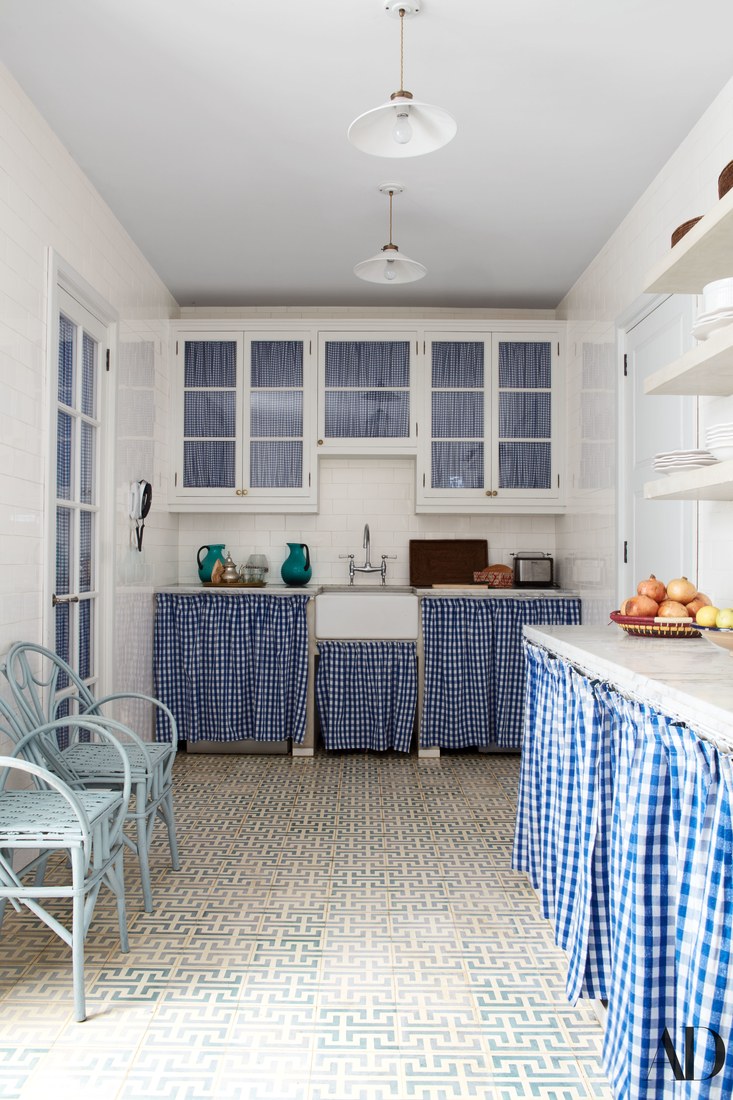 Blue gingham jazzes up the Tangier kitchen of one of my favorite decorators, Veere Grenney. View more of the home here. (Photo: Simon Upton) 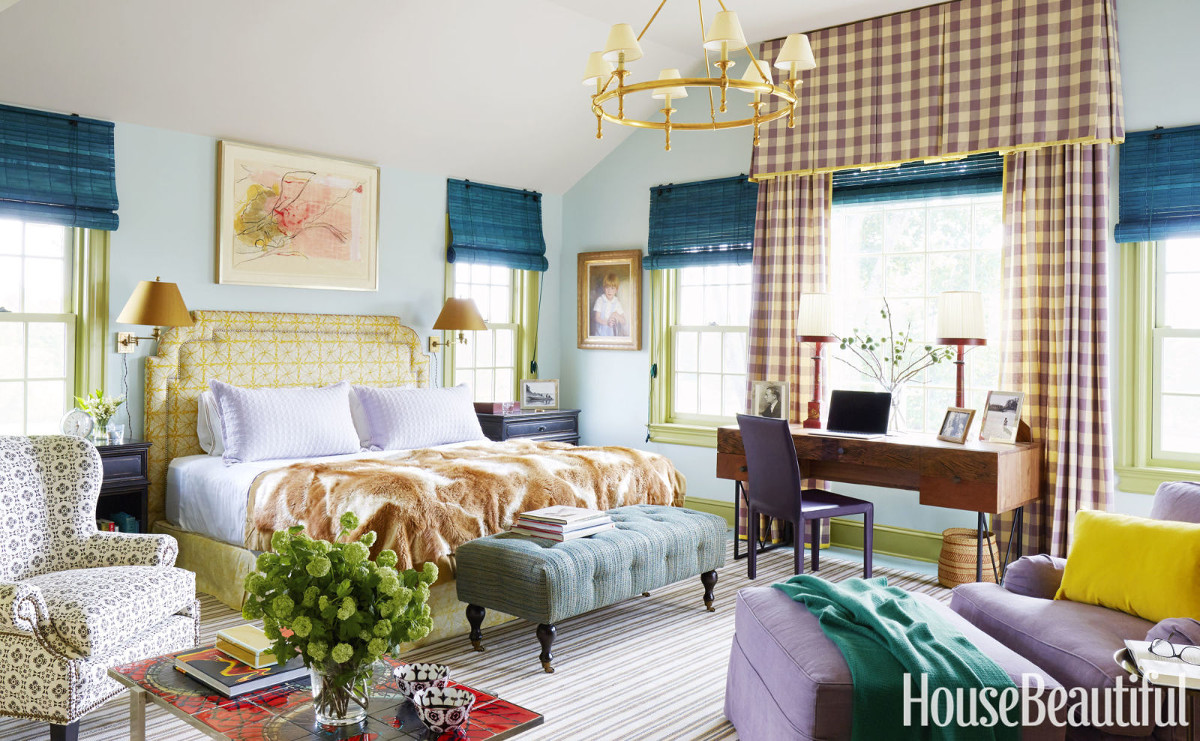 In this bedroom by Jeffrey Bilhuber curtains made of Chelsea Textiles’ Large Check steal the show. The designer told House Beautiful, “I’m a pushover for gingham curtains.” The walls are painted in Benjamin Moore’s Colony Green. 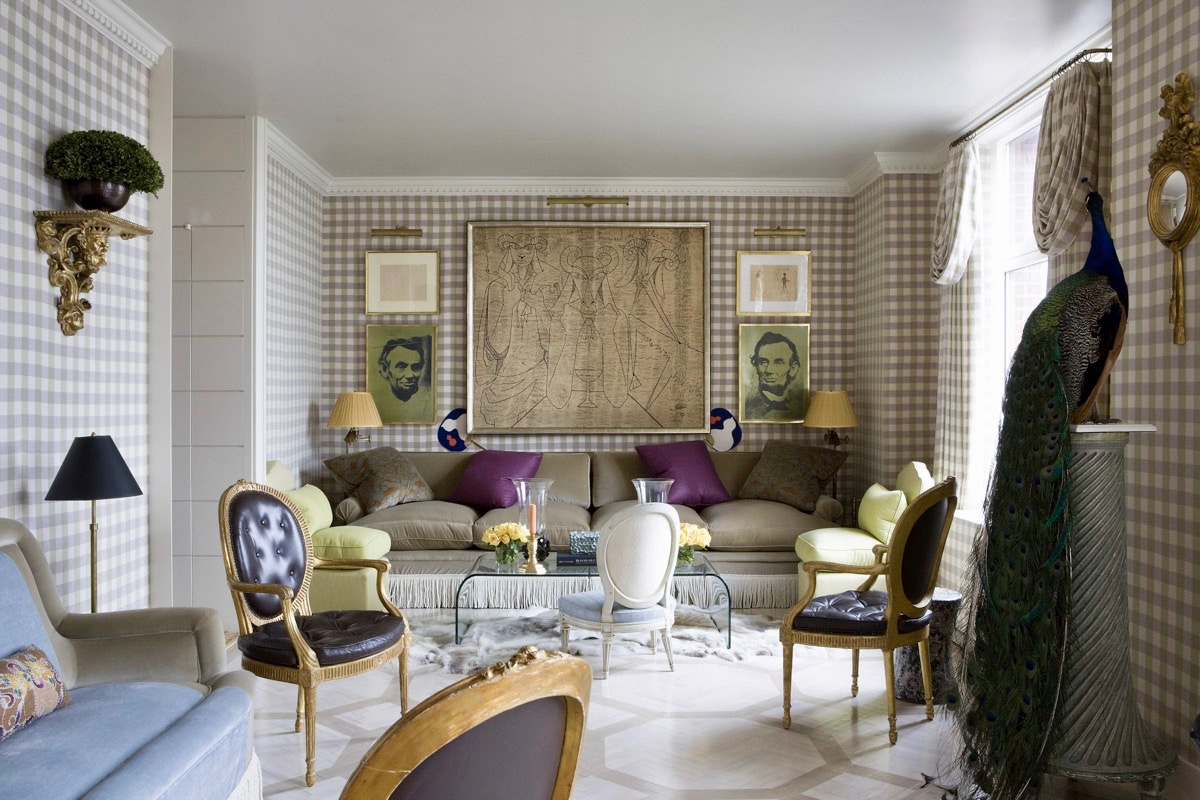 Bilhuber also used gingham on the walls of his own New York apartment.

Here’s another view of the gingham goodness in Bilhuber’s abode. Can we also please admire those painted floors and the trim details on the doors? Genius. 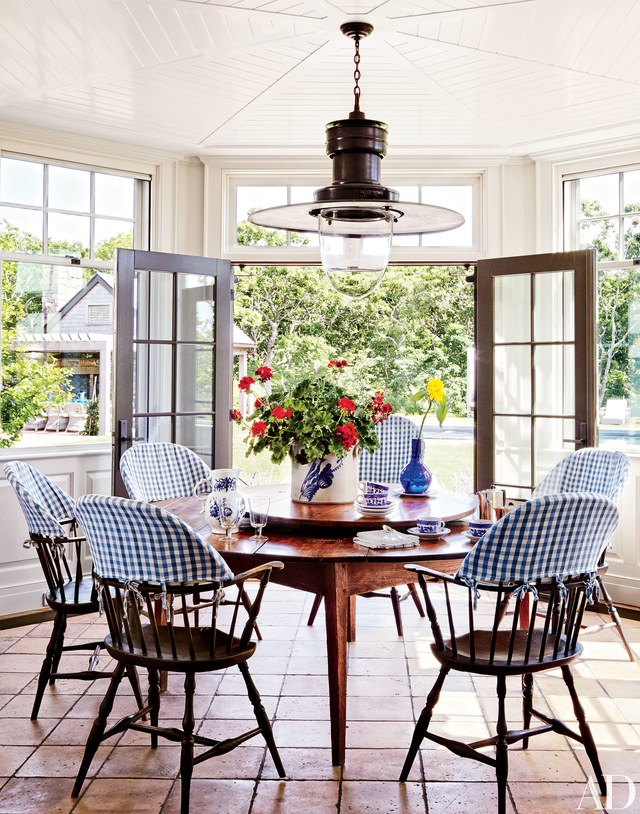 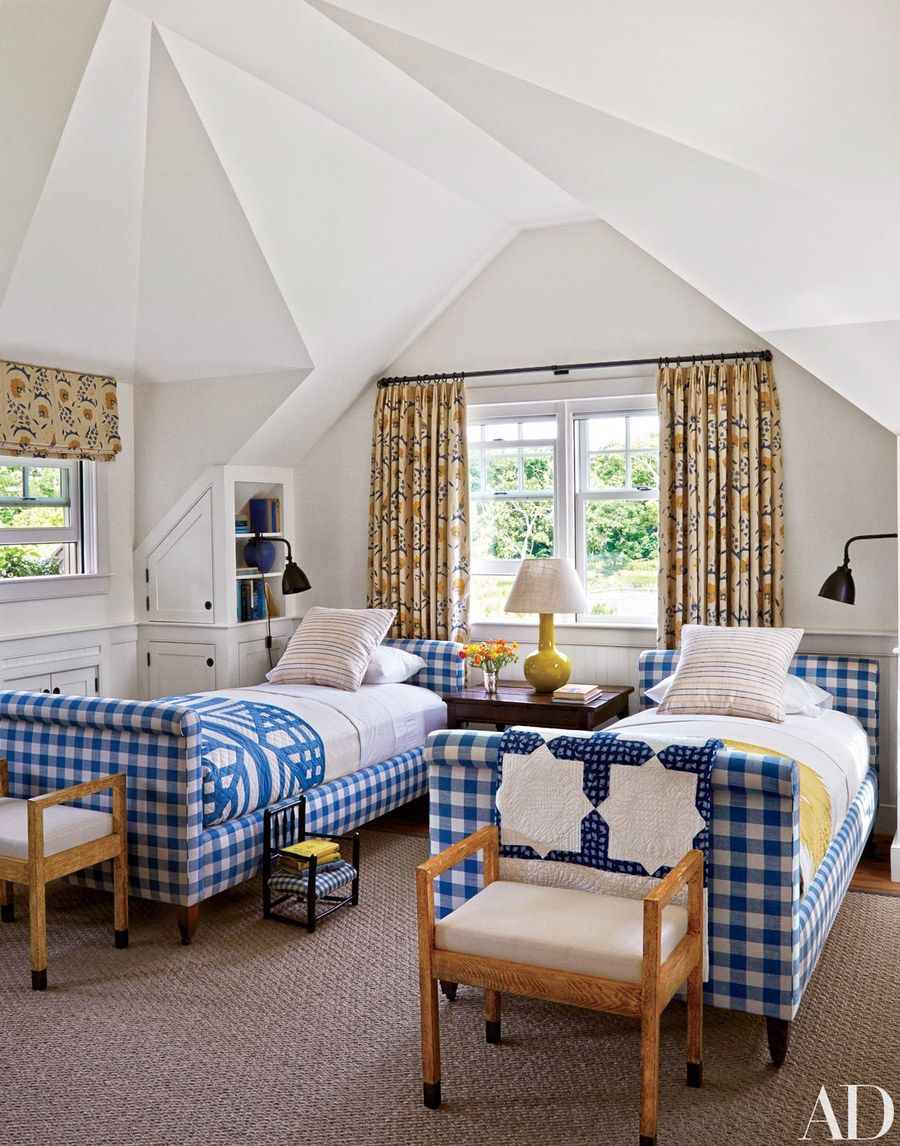 Upstairs in the summer home is a guest room with twin gingham beds designed by Cunningham. The curtains and roman shade are in one of my favorite Robert Kime fabrics.

How to go gingham in your home: